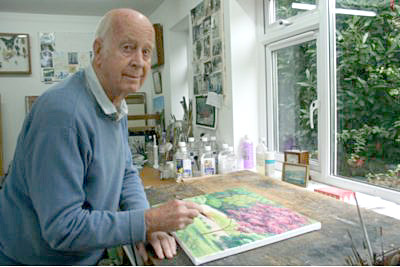 Peter Barrett began his career as a graphic designer, working in design groups in London, Canada and Athens.  It was while living in Greece that he was able to develop as an artist and he had four one-man exhibitions of abstract expressionist paintings at the Drian Galleries, London.

At the same time his fascination in the natural world prompted him to paint detailed and accurate watercolors of fish, birds, flora and fauna.  This work led to commissions from publishers of natural history books.  In the course of his career he illustrated over 40 books on wildlife as well as children’s books.

Peter is a versatile and productive artist, both as a commissioned illustrator and as a painter of his own subjects in oils, pastels and watercolors.  His work has been exhibited in many galleries, in London, Greece and the US.  He and his wife, novelist Susan, live in Devon, near their children, grandchildren and great grandchildren.  He continues to paint daily.

His illustrations for Birdwatcher’s Diary, by Roger Lovegrove, in 1982 drew critical acclaim.  See Wikipedia Peter Barrett for a complete Bibliography.

Artist for Wind in the Willows:

Peter Barrett says, “When you’ve worked as an artist for as long as I have, it is often rewarding to look back at commissions carried out with the kind of affection usually reserved for good, old friends. So it was for me and the illustrations I did for The Wind in the Willows in 1987.

“In 2021 I was reminded of bringing Kenneth Graham’s wonderful cast of characters to the page. The reminder came when one of those illustrations was sold internationally. I had the idea that it would be fun to revisit Mole, Ratty, Badger and the whole cast of the book but this time in color.

“The result? Another group of original illustrations, this time all painted in watercolor, join any other Barrett originals circulating in the hunting grounds of collectors.” 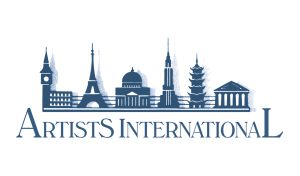